Volocopter is Flying Manned!  – A Step Forward in Urban Mobility

The premiere of manned flights with the world’s first certified Multicopter, e-volo’s (now Volocopter GmbH) Volocopter VC200, marks a step forward in urban mobility. The Volocopter is a personal aerial vehicle designed to be so easy and safe to fly that anyone can command it. Due to its electric propulsion, it has no tailpipe emissions and is impressively quiet. For the first time humans’ dream of personal flight as a daily routine becomes attainable. As such it not only offers more widespread use in conventional aircraft domains, but brings us another step closer to air taxi services and entire transportation systems in the third dimension.

The Volocopter VC200 received the ‘permit-to-fly’ as an ultralight aircraft from German aviation authorities in February 2016. In the context of the commenced test program, e-volo has started to conduct manned flights. The historic world premiere of a flight with a certified multicopter was made by e-volo managing director Alexander Zosel on March 30th, 2016 on an airfield in Southern Germany.

“The flight was totally awesome,” Alex Zosel said right after his landing. “The machine was absolutely reliable, there were no vibrations, it was tremendous. Anyway, the first flight was simply unbelievable. I got in, we did the pre-checks for what felt like maybe 20 seconds, and after that I’d already got the all-clear for flying. I didn’t wait long, I simply pushed the lever upward and the Volocopter simply sprung upward in a single bound. It was unbelievable, it hovered totally weightlessly, I mean it didn’t at all feel like there were crazy forces at work, it was all just totally light and the Volocopter immediately converted every movement I made with the joystick. It is definitely a sublime feeling to lift off, fly the first few meters, and then actually take my hand off the joystick and think that, yeah, it’s really as if I’m standing on the ground, and then I look down and there are 20-25 meters beneath me. So it’s definitely unbelievable what we’ve achieved here. It’s seriously unbelievable!”

Thanks to its innovative flight control, the vertical take-off and landing aircraft (VTOL) is extremely easy to fly. The Volocopter is piloted one-handedly with a single joystick and significantly reduces the number one reason for accidents in conventional helicopters: human error. To demonstrate this feature, Zosel releases his hand from the joystick to applaud his team during the premiere flight, while the Volocopter automatically holds its position. A comprehensive redundancy concept compensates any failure by critical components including the loss of several motors. This was demonstrated exhaustively during the certification process. Furthermore, the Volocopter is quiet and due to its purely electric motor with its quickly interchangeable battery system, it is also absolutely emission free.

Technology assistance was provided by German drone manufacturer “Ascending Technologies”, which has recently been acquired by US chip maker Intel Corporation. “Intel congratulates e-volo on this accomplishment,” said Josh Walden senior vice president and general manager of the New Technology Group at Intel. “Technology developed by Ascending Technologies enabled the flight controls, motor electronics and key elements that extend multi-rotor UAV technology to this new type of aircraft. We look forward to aiding the development of more manned and unmanned vehicles in the future.”

e-volo’s next goal is to receive a type certification and to produce the Volocopter in large quantities. Thus, in the next 2 years, the well-established air sports market will be entered, similar to the introduction of the gyrocopter and the helicopter. In a further developmental step, air taxi services are expected to be established. Initially, they will be planned for predetermined routes as airport shuttles or at sensible traffic nodes such as bridges. Medium-term, brand new, increasingly autonomous mobility concepts can be offered with the Volocopter, in which individual as well as public transport can be partly shifted into the sky.

At the invitation of NASA, Florian Reuter from the e-volo management team presented the newest developments in the Volocopter to experts from air and space travel at the “On-Demand Mobility” workshop in Washington. The judicial framework, which would have to be adjusted internationally to allow individual flight in urban areas for everyone, was also discussed at the workshop. In advance, NASA had published a study addressing this topic, which highlighted the positive contribution such a system would have on the alleviation of the daily traffic congestion in the Silicon Valley region in California.

The first flight of Alex Zosel marks the beginning of the Volocopter test flight program, which will be conducted in three phases. In the first flight phase, flights at a speed of 25 km/h maximum at low altitude are planned. In the second testing phase, flight maneuvers at a speed of 50 km/h at medium altitude will be executed. Test flights within the third testing phase aim to validate the system at higher altitudes and in the full speed range of the VC200 up to 100km/h.

Unmanned test flights as a precursor for ‘permit-to-fly’

In the run-up to receiving the ‘permit-to-fly’, the e-volo team had gathered experience in over 100 test flights. With the help of a professional remote control, the team was able to carry out stress tests on the entire system and its individual modules and components. For instance, they switched off among other things, propulsion motors, batteries, as well as flight controls during flight. Testers also fed wrong information from ‘defective’ sensors into the flight control system. Moreover, they carried out unmanned flights in turbulent weather conditions. Thus, even before the market introduction of the Volocopter, e-volo has proven impressively that these aircraft can already fly almost autonomously today. But until autonomous flights are allowed, the international regulations have to be further adapted, a process that has already been taken up by politicians and the respective authorities.

Technical Description of the Volocopter

The Volocopter is made of a light-weight, fiber composite material. In addition to cruise flights, it can also take-off and land vertically as well as hover in the air. The VC200 Volocopter runs on all-electric motors. The electric motors of its 18 rotors are powered by nine independent batteries. When in a floating state and with a 450 kg take-off weight, the VC200 requires about 45kW, depending on the air pressure / temperature. Its redundancy concept helps ensure stability, even if parts of the system were to fail. This principle is used in all system components that are necessary for safe flights. The necessary thrust required to provide buoyancy is achieved through several independently driven rotors, each with two fixed blades. Unlike a helicopter, the blade angle on the VC200 cannot be adjusted. The amount of thrust produced depends solely on the rotation speed of the different rotors.

Appropriate combination of the torques around the axis (roll and pitch), which are produced by the speed differences of the different rotors and that are perpendicular to the axis (yaw), as well as alterations in the total thrust produced by all the rotors enable the Volocopter to maneuver in all three rotational degrees of freedom (pitch, roll, and yaw), whereas the fixed setup of the rotors allows for translational movement (vertical, “up/down”). In combination with the position angle, the Volocopter is able to make flight movements in all six rotational and translational degrees of freedom as well as indirect horizontal movements (“forwards/backwards” and “rightwards/leftwards”).

Although the Volocopter initially exhibits what would seem to be unstable flight characteristics due to its relatively high number of rotors that have a fixed blade angle, its multi-redundant flight control system helps ensure precise altitude control and positioning stability. It is actually much more stable than conventional aircraft. It adheres to the pilot’s specifications and compensates for external effects independently. This makes flying it much easier, and the pilot can control the Volocopter safely, even in adverse environmental conditions.

The flight control system comprises of several completely independent units. Each flight control unit contains a complete set of positioning sensors that consist of pressure gauges, gyroscopes, accelerometers, and magnetometers for all three spatial axes. Theoretically, each of the flight control units can control the VC200 independently. The Volocopter is operated with one hand using a joystick. The pilot intuitively controls all flight axes through rotational movements of the joystick’s axis. Rising and falling commands are given through an altitude control thumb button. In order to land, the pilot only needs to press and hold the button down until the Volocopter is on the ground. Once it nears the ground, the control system automatically slows down the Volocopter to help ensure a gentle landing.

Extensive photo and video material can be found here on the press portal. Further Video clips for inclusion in online reports are available on our YouTube channel.
Further information on our website. 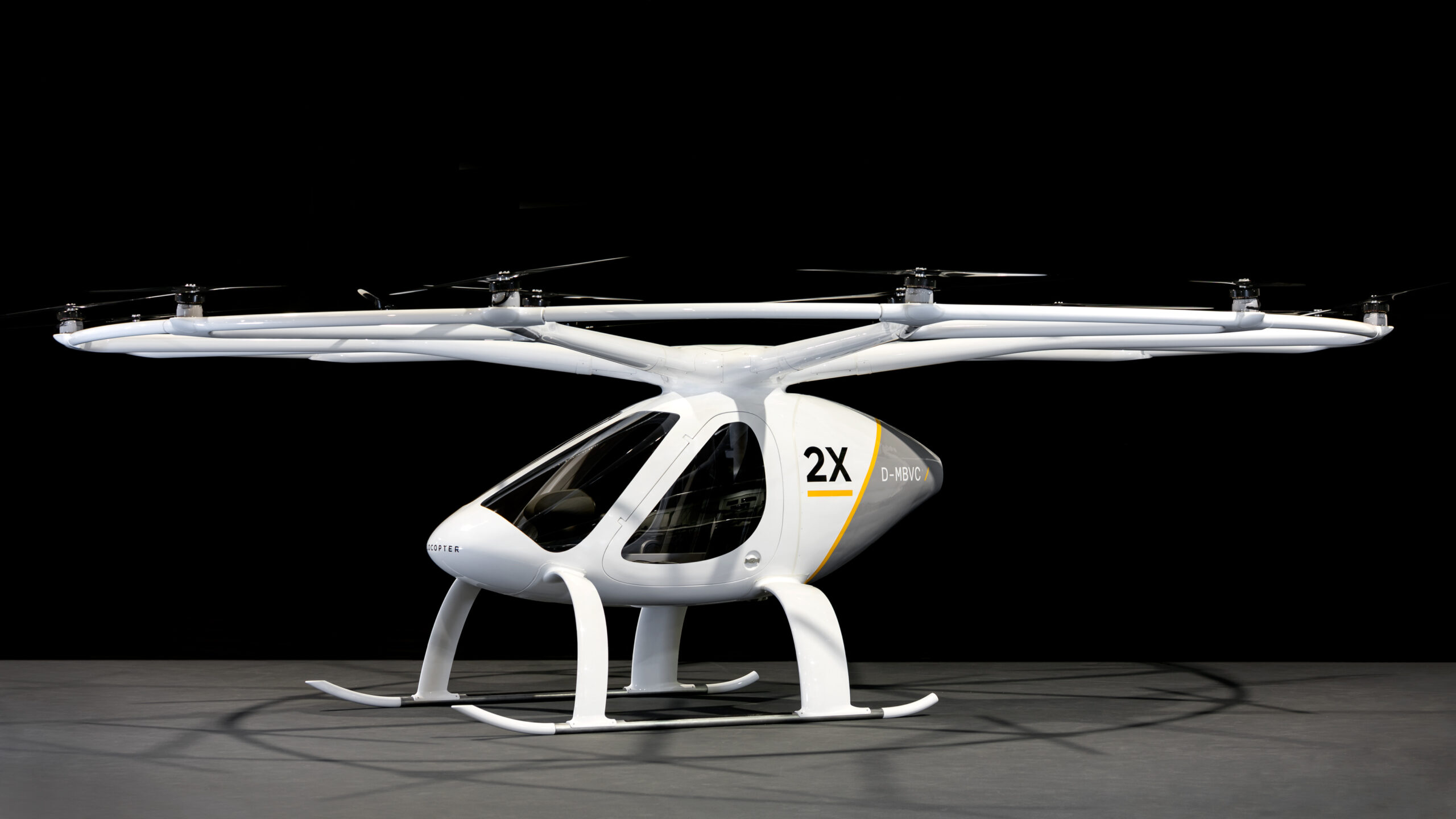 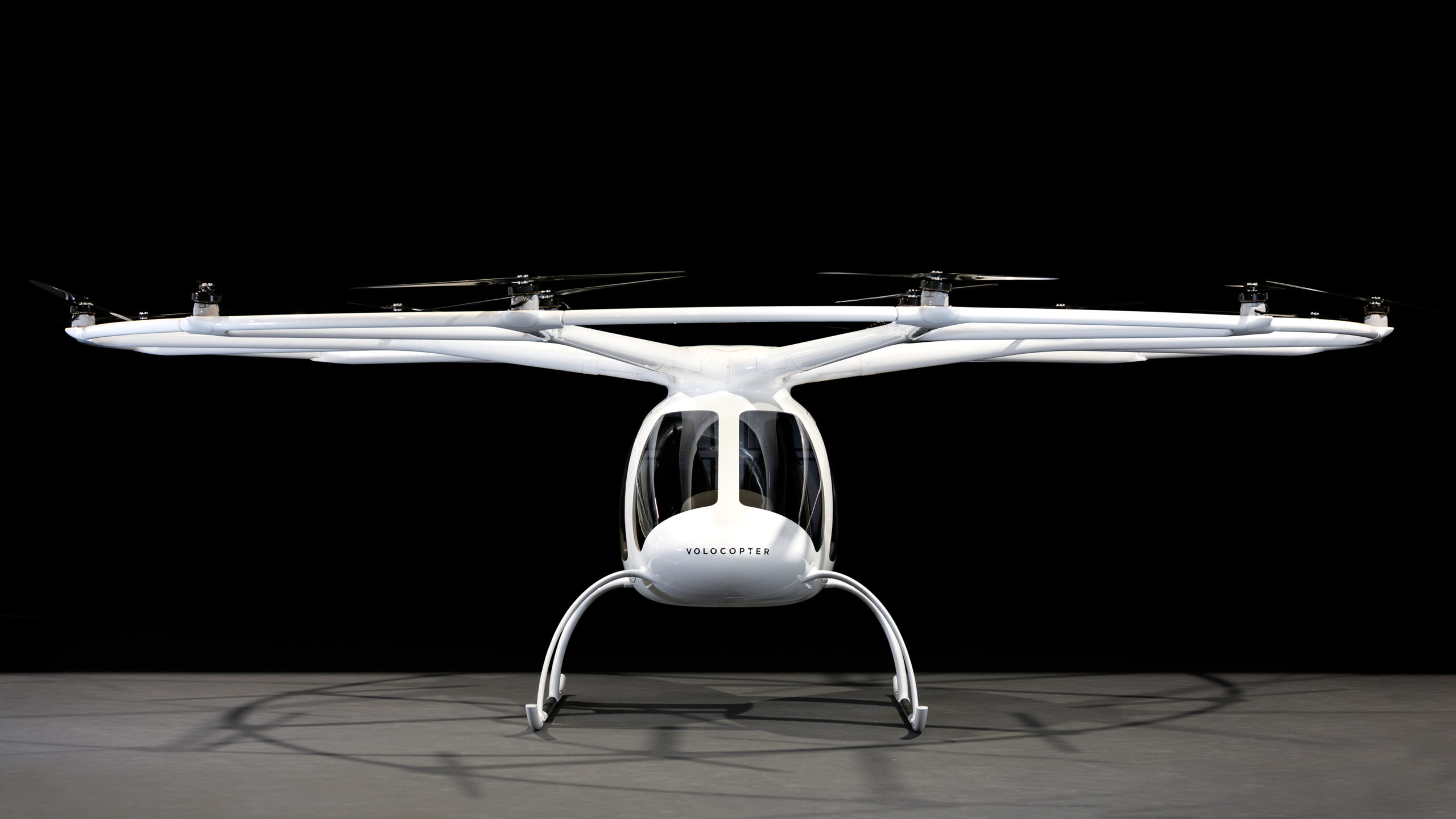 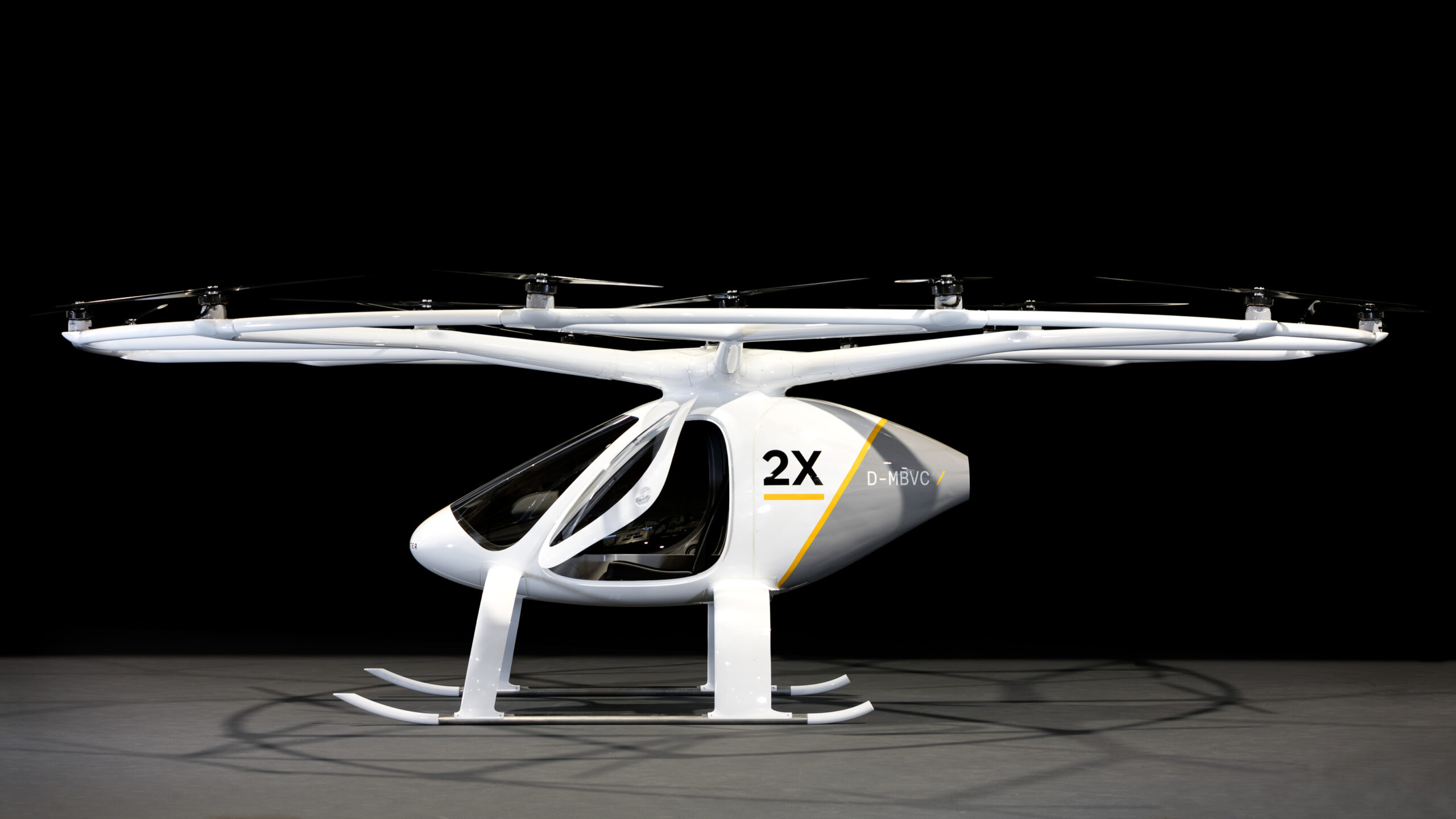