#Blog: Why Minimizing Airborne Noise Emissions Is So Important for UAM

One of the major hurdles to launching a robust commercial urban air mobility (UAM) ecosystem are airborne noise emissions. So, we’ve been working hard to keep them to a minimum. Here’s how.

Near-silent skies
Is there anything worse than being stuck in an ear-splitting traffic jam? Well, there just might be. One of the main challenges facing all UAM manufacturers is to actually devise workable strategies that will effectively limit airborne noise emissions on the ground. And bring you peace of mind in more ways than one.

In terms of its noise signature, Volocopter took the proverbial bull by the horns right from day one by integrating noise-limiting features into the design of its rotor and tip speeds. Now, it is working very closely with its partners Aéroports de Paris (ADP) and RATP (the city’s public transportation authority) to do everything it can to keep its airborne noise emissions in check in Paris too, as it gears up for commercial launch in time for the 2024 Paris Olympics.

Why does this matter? Because public acceptance of all electric vehicles matters. And the way to secure this in the French capital is to map out routes inside the city that ensure the Volocopter aircraft do not generate a cacophony that exceeds the city’s permitted noise levels. Part of its approach will involve flying at specific times of day. Overall, Volocopter will do this by ensuring low disc loading – the lowest disc loading currently on the market, in fact! – and a low RPM (revolutions per minute) rate; together, these will yield the requisite low noise emissions both during takeoff and landing (a feature that separates Volocopter from other VTOL concepts). So how has the UAM pioneer been documenting its progress?

Spectators look on as the VoloCity air taxi completes a flight at Pontoise airfield near Paris.

Going head to head with helicopters

Volocopter has conducted a whole raft of aircraft noise trials as part of its flight testing efforts. One of these trials, detailed in our 2019 white paper, involved comparing the 2X with the Robinson R22 small helicopter. It showed that the eVTOL (electric vertical takeoff and landing) aircraft was 2x quieter than the R22 during the climb phase and 17 dB quieter while hovering at an altitude of 75 meters. In fact, Volocopter even demonstrated that the 2X is only as loud as the helicopter is when it’s over seven times further away. A big check mark against the UAM pioneer’s name.

More good news was just around the corner, with additional tests proving that once the VoloCity takes to the commercial skies, its noise emissions will be a mere 25% of those produced by the Bell 407 chopper, which is currently treating passengers to overhead sightseeing tours of the Big Apple. It’s also worth mentioning that the VoloCity’s noise emissions are spread across 18 smaller rotors, as compared to a helicopter’s mighty main rotor– a conscious decision to distribute the sound it generates, thus keeping its noise signature to a minimum. Why? Well, it’s because air taxis with a large disc area and only two people inside result in low disc loading. On top of that, the accumulation of several noise sources as compared to a single noise source delivers an improved noise signature by accelerating the air around them at lower speeds over a larger surface area.

The acoustic signature is particularly important. It’s not just about a noise source being as loud as a particular decibel level, but also if that noise is disturbing to our ears. Why? Simple. It’s because the human brain perceives monotone sounds as being less “annoying” than erratic sounds. During vertical takeoff and landing, when noise emissions are at their most noticeable, the acoustic signature is particularly important; once in flight, these will be less noticeable to those on the ground. 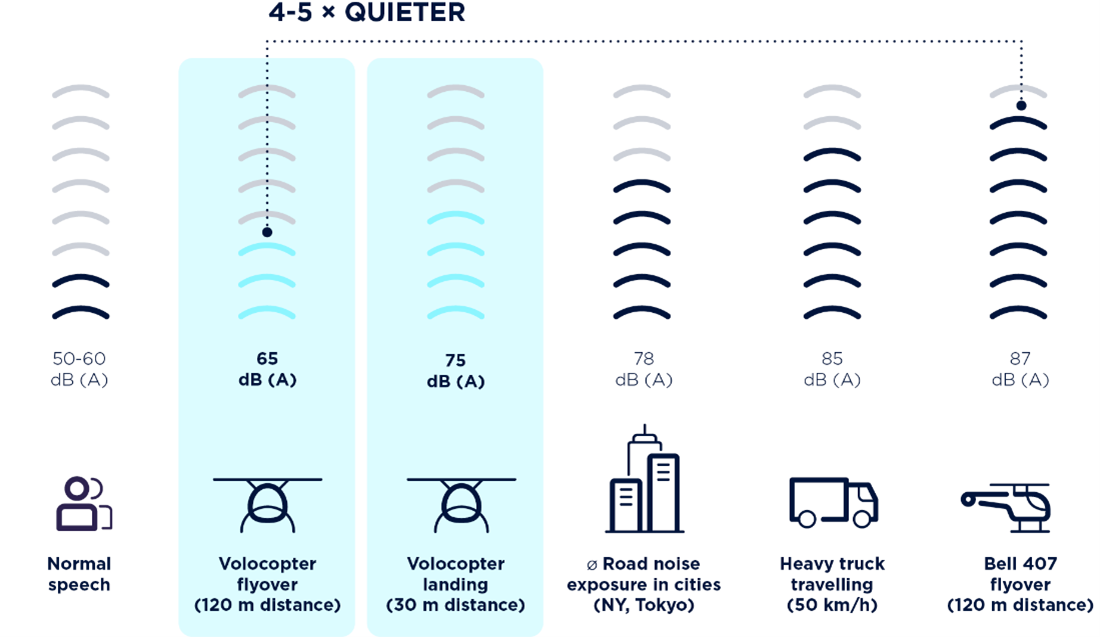 VoloCity noise signature as compared to other urban sounds

It’s also worth remembering that a constant perceived noise signature is less disturbing than an intermittent one. Just imagine an ambulance hurtling past you with its wailing siren – annoying, isn’t it? Volocopter’s aircraft have two winning features in that respect: rotor blade architecture and RPM control. First, the 18-rotor geometric arrangement is a key design feature that delivers a consistent noise, thus eliminating the sudden, short, and sharp element that causes so great a perceived disturbance. Put simply: our brains tend to ignore constant noise sources over time. Second, the RPM control that has been tested in multiple simulations and flight tests, which produce predicted absolute values that are essential for taking future measurements.

Volocopter gleaned even further tangible results when it showcased its low noise emissions at a demo event attended by around 12,000 people in Stuttgart (Germany). There, visitors were impressed by flights that were quieter than expected. What’s more, a University of Stuttgart study also showed how overall societal acceptance improved among a group of flight demo observers, all of whom agreed they had a better feeling about the aircraft’s noise, comfort, and safety after witnessing the flight. A subsequent demo in Singapore yielded further positive results, which meant it was time for Volocopter to impress its French partners.

One partner city backing Volocopter’s commercial launch plans is the French capital. The importance of ensuring quiet operations on its journey to realizing this launch was underscored in March 2022, when the UAM pioneer devoted a full week to conducting aircraft noise trials using its 2X demonstrator just outside the city, at the nearby Pontoise airfield. The demonstrator is marginally smaller than the two-seater VoloCity model the company aims to launch in time for the 2024 Paris Olympics. But it’s not too much of a stretch to imagine as this 18-rotor-configuration prototype very closely approximates the finished product.

Since eVTOLs are a brand-new technology, there is as yet no baseline for recording such measurements. Nevertheless, according to Volocopter’s Senior Engineer Aerodynamics, Ulrich Schäferlein, flight tests have helped the UAM developer evaluate the operational aspects of the aircraft’s noise emissions and the impact of ambient noise. He believes the main question is to figure out how to ensure representativity and repeatability in noise measurements. Only then can noise be taken into consideration as the aircraft is integrated into the chosen airspace.

As far as the company’s Parisian partners are concerned, RATP is very interested in exploring how eVTOLs can work alongside the city’s existing transportation network. RATP has been conducting its own noise tests for decades and worked closely with Volocopter during the Pontoise trials, along with local noise assessment authority Bruitparif. ADP has also said that it is fully committed to reinventing tomorrow’s aviation. 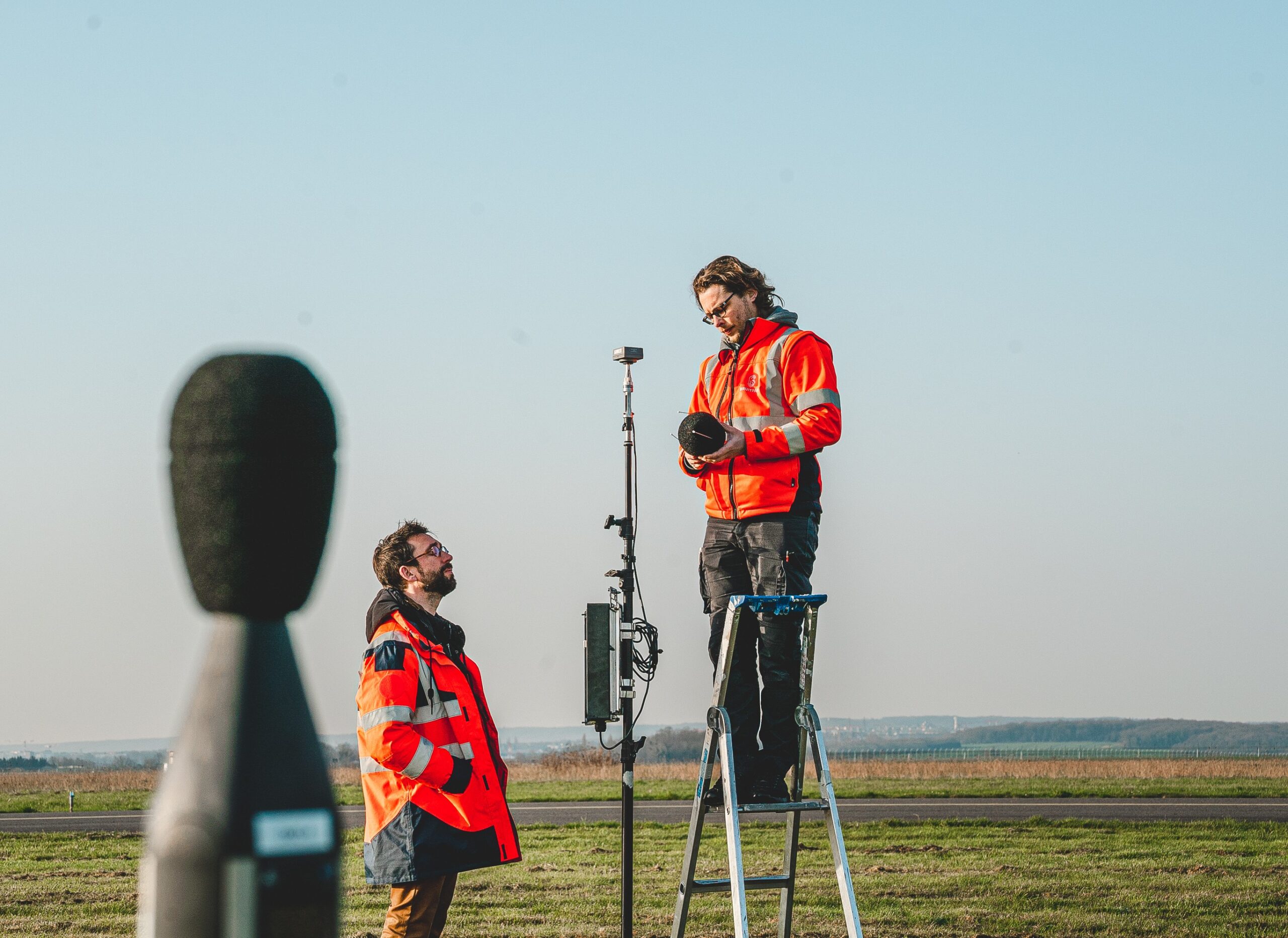 Ultimately, what no one wants is to simply shift our collective “road rage” to higher altitudes – but that’s not in line with the Volocopter ethos anyway. Not only does the company have every faith in its technology’s acoustic footprint, the inner mechanisms are consistently subjected to ongoing improvements in terms of both retrofits and aircraft updates. And that’s precisely why we’re working so hard behind the scenes. So, watch this (air)space as we gear up to turn Paris into the city of flights!

HAPPY TO HAVE YOU!
To activate your subscription, please click the link in the email that should have already landed in your inbox. Please also check your spam folder.
THE NEWSLETTER
Sign up for the Volocopter Newsletter and receive all the latest UAM intel.