Munich/Bruchsal, 14 October 2020 – The results of the world’s first feasibility study on the use of piloted multicopters in rescue services has concluded that air rescue with piloted multicopters is possible, makes sense, and improves the emergency medical care of the population. The 130-page study was launched at the end of 2018 by ADAC Luftrettung and sponsored by the non-profit ADAC Foundation. In cooperation with Volocopter and the model regions Ansbach-Dinkelsbühl (Bavaria) and Idar-Oberstein (Rhineland-Palatinate), the study focused on the question: Can the rescue service system be improved and made future-proof by using multicopters as transport for emergency doctors? The multicopter is not intended to replace the rescue helicopter, but to complement the rapid assistance from the air. Patient transport is not planned for initial implementation.

Multicopters are new, vertical take-off and landing (VTOL) aircraft with several electrically powered rotors. Up to now, the aircraft have been first and foremost developed as air taxis in the private sector. After almost one and a half years of research, the tactical advantage of multicopters in rescue services can now be theoretically supported for the first time. According to the study, significant improvements in emergency care for an operating radius of 25 to 30 kilometers has been shown. In this case, the optimal flight speed of the multicopter should be between 100 and 150 km/h with a minimum range of approx. 150 kilometers. These ideal conditions would be technically possible in about four years.

With such multicopters, emergency physicians could often be at the scene of an emergency twice as fast in rural areas compared to a conventional emergency medical service vehicle (NEF) and reach around two to three times as many patients in a larger health service area. According to the study multicopters as an adequate means in combatting the shortage of emergency doctors in many places and enabling current emergency doctors to work more efficiently. This was one of the most important findings of the study in light of the national average emergency physician arrival time worsening in the last 20 years by almost 40 percent.

Another positive finding is that rescue helicopters could also be used even more effectively in the future. For now, they act as transport for emergency doctors in around 60 percent of emergency cases. Helicopters could instead take advantage of their potential to transport patients to (specialized) clinics further away. This transport effectiveness also improves emergency care for people.

For the study, the internationally renowned Institute for Emergency Medicine and Medical Management of the Ludwig Maximilian University of Munich (INM) conducted a macro-analysis for the states of Bavaria and Rhineland-Palatinate to determine the potential use of multicopters and a micro-analysis for two model regions. Based on historical Rescue Coordination Center data, the researchers computer simulated more than 26,000 emergency operations with multicopters for the Ansbach rescue service area with the air rescue bases in Dinkelsbühl,Bavaria and in Idar-Oberstein, Rhineland-Palatinate. Scenarios were simulated with different deployment radii, ranges, and speeds.

The technical feasibility was examined based on project partner Volocopter’s VoloCity, as this multicopter is expected to be ready for the market at an early stage and, with 18 fixed rotors, has a particularly high degree of reliability. According to the study, its advantage over ground-based NEFs is greater in rural areas than in the city. Compared to a rescue helicopter, the multicopter is quieter and produces less emissions.

“The work of the project participants is very impressive. Today we are convinced that multicopters can help shape and improve future rescue services. The results are so promising that will pursue operational testing of the project,” announced Frédéric Bruder, Managing Director of the non-profit ADAC Luftrettung.

Dr. Andrea David, Chairman of the ADAC Foundation, adds: “The increasing shortage of emergency doctors is a major challenge for the emergency medical care of the population – especially in rural areas. For this reason, the ADAC Foundation has supported this innovative research project conceptually and financially from the very beginning. Now, we are looking forward with excitement to the field test as the results of the scientific study make it clear that piloted multicopters can act as fast emergency medical transporters and help solve this serious problem in the near future.”

Operational testing is planned to begin in 2023 and will take place in the two existing model regions: the Ansbach rescue service area and the ADAC air rescue station in Dinkelsbühl, Bavaria and at a new, multicopter-only base in the Idar-Oberstein region of Rhineland-Palatinate.

District Administrator Dr. Jürgen Ludwig, Chairman of the Zweckverband für Rettungsdienst und Feuerwehralarmierung Ansbach, adds: “In rural areas, long distances between the emergency doctor and the patient and between the patient and the nearest suitable hospital are often a problem, and this is becoming more and more challenging. Here is where we need new ideas. I see the multicopter model project as a chance to ensure and improve the quality of care and to do so by creating a fine-tuned cohesion of ground-based emergency medical services, rescue services, and air rescue services. In this respect, we are very pleased to be a project partner in the model project.”

Until the pilot project starts, further technical test flights will take place at Volocopter’s non-public research sites to assess the piloted aircraft for air rescue services in special conditions. This includes take-off and landing on slopes, in poor visibility, at night, or in winter. The current Volocopter technology is sufficient and, therefore, suitable for these tests. The German Aerospace Center (DLR), a long-standing research and development partner of the ADAC Luftrettung, is scientifically supporting the project.

“We are proud to be contributing to the greater public good by applying Volocopter technology to air rescue missions. In the close cooperation with ADAC Luftrettung, it has become clear how profound the professional expertise in the field of air rescue and helicopter fleet operation is. At the same time, this collaboration shows how forward-looking and open to innovation the project participants are,” says Florian Reuter, CEO of Volocopter. “The VoloCity is the first multicopter worldwide that is already in the process of commercial certification, and together with ADAC Luftrettung, it could already save lives today. We are at the beginning of a progression in which our technology and thus the performance indicators such as range and airspeed will continue to evolve. We are pleased to be the partner of choice for ADAC Luftrettung in the study, the upcoming test operation, and what follows thereafter.”

The crew consists of a pilot and an emergency physician compared to a classic rescue helicopter team of a pilot, emergency physician, and paramedic (TC HEMS). Since emergency patients depend on the safe and quick arrival of the emergency doctor, multicopters must be able to operate in the rescue service 24 hours a day and even in bad weather according to the study. New challenges are facing the crew. Since the emergency physician is often the first person to arrive at the scene of an emergency by multicopter, they require special medical equipment. The multicopter must be weight-optimized in comparison to a NEF because of the aircraft’s limited payload. Moreover, the pilot must support the doctor even more than before and requires additional emergency medical training.

In addition to the medical and technical requirements for a test operation, the study also examined economic efficiency. The most important message here is that researchers conducting the study believe that cost-efficient operation is possible. Costs for this operation are lower than the generally high investment requirements in the health care system.

Another dimension of the study was the project’s legal feasibility. Insuperable obstacles for multicopter operations used in rescue services were not observed. The necessary regulatory adjustments are highlighted in the study. To improve the rescue service in a systemically relevant way, open legal questions should be clarified at an early stage according to the project managers’ message to politicians and aviation authorities.

From a societal perspective, the experts say that new developments in aviation engineering can contribute to further expanding Germany’s position as a center of innovation. Multicopter use in rescue services could serve as an incubator for further applications of this technology. Furthermore, countries, for which helicopter rescue services were previously unimaginable or unaffordable, can also benefit from such new technologies. Based on the research results and the state of technological advancements, a nationwide network of up to 250 multicopter bases could be created in Germany by 2050 according to the project managers’ optimistic forecast.

“Fifty years ago, the ADAC was one of the first in Germany to test the use of rescue helicopters in a field trial. So, it is only logical that today we are the first to lead the air rescue sector in Germany into the future with new technologies,” says Frédéric Bruder. For him, the results of the study mark the beginning of a new era in airborne rescue services. “Right from the start, we were convinced it could work – just as the pioneers of air rescue were convinced back then that helicopters could land on highways to save lives”. They too were not taken seriously, at first.

ADAC Luftrettung is celebrating its golden anniversary this year. Their success story of air rescue services in Germany began with the commission of Christoph 1 in Munich-Harlaching on November 1, 1970. 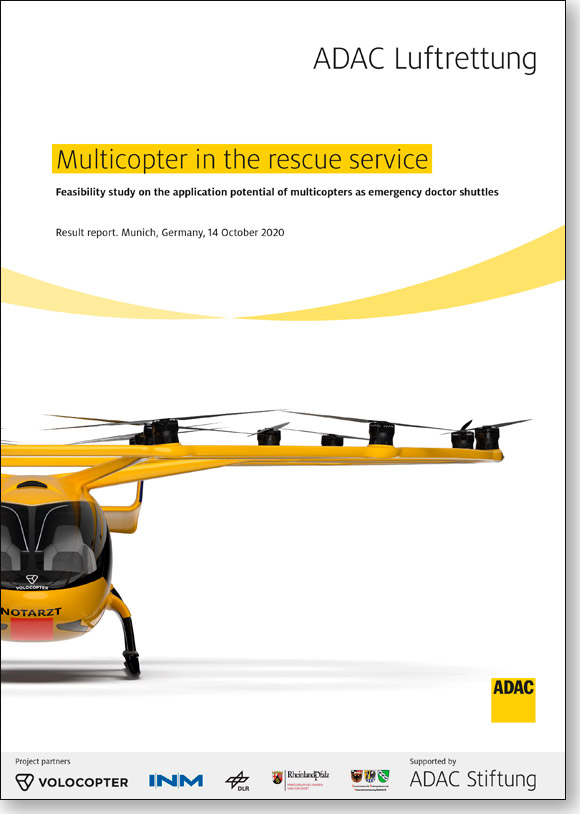 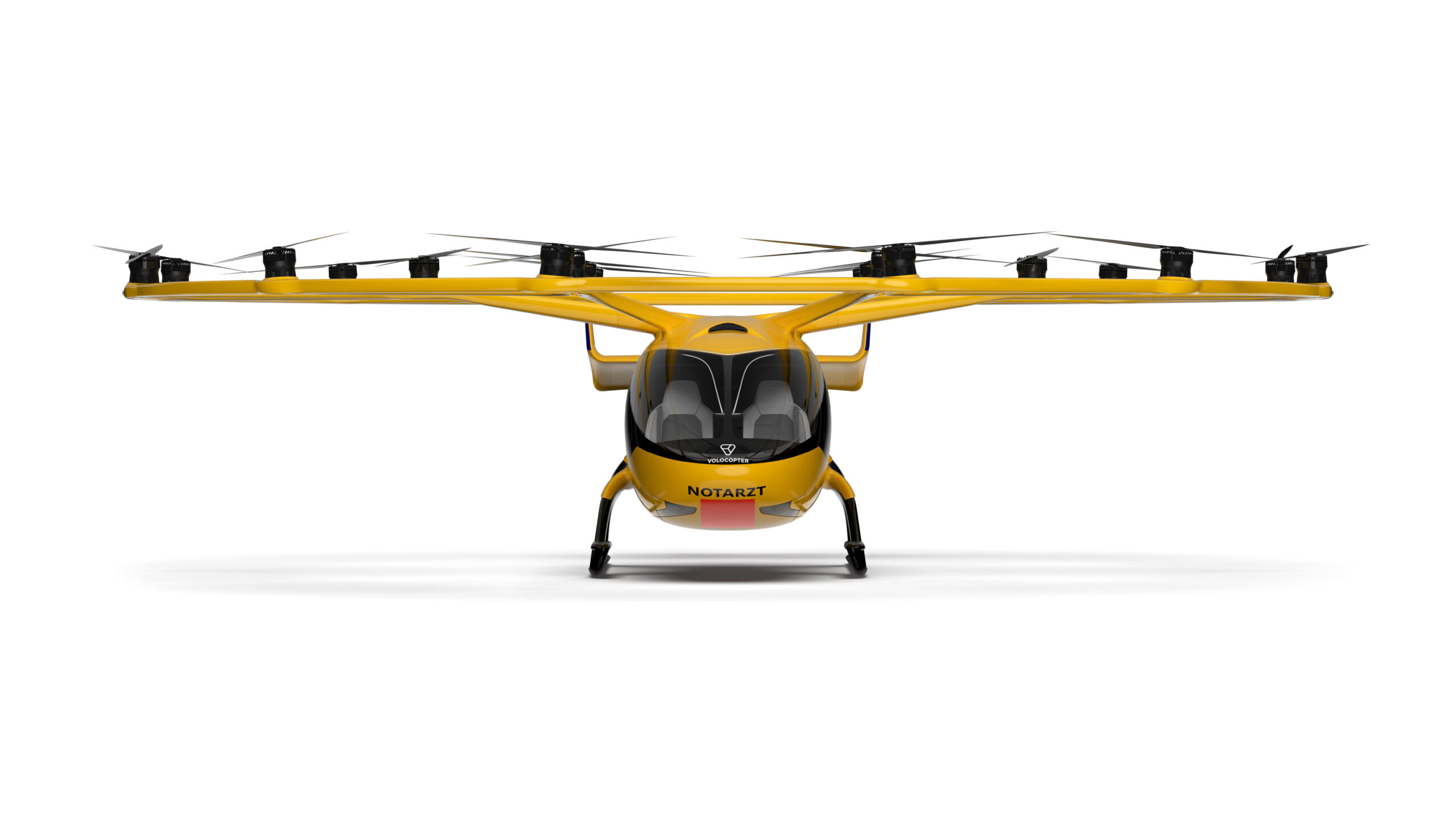 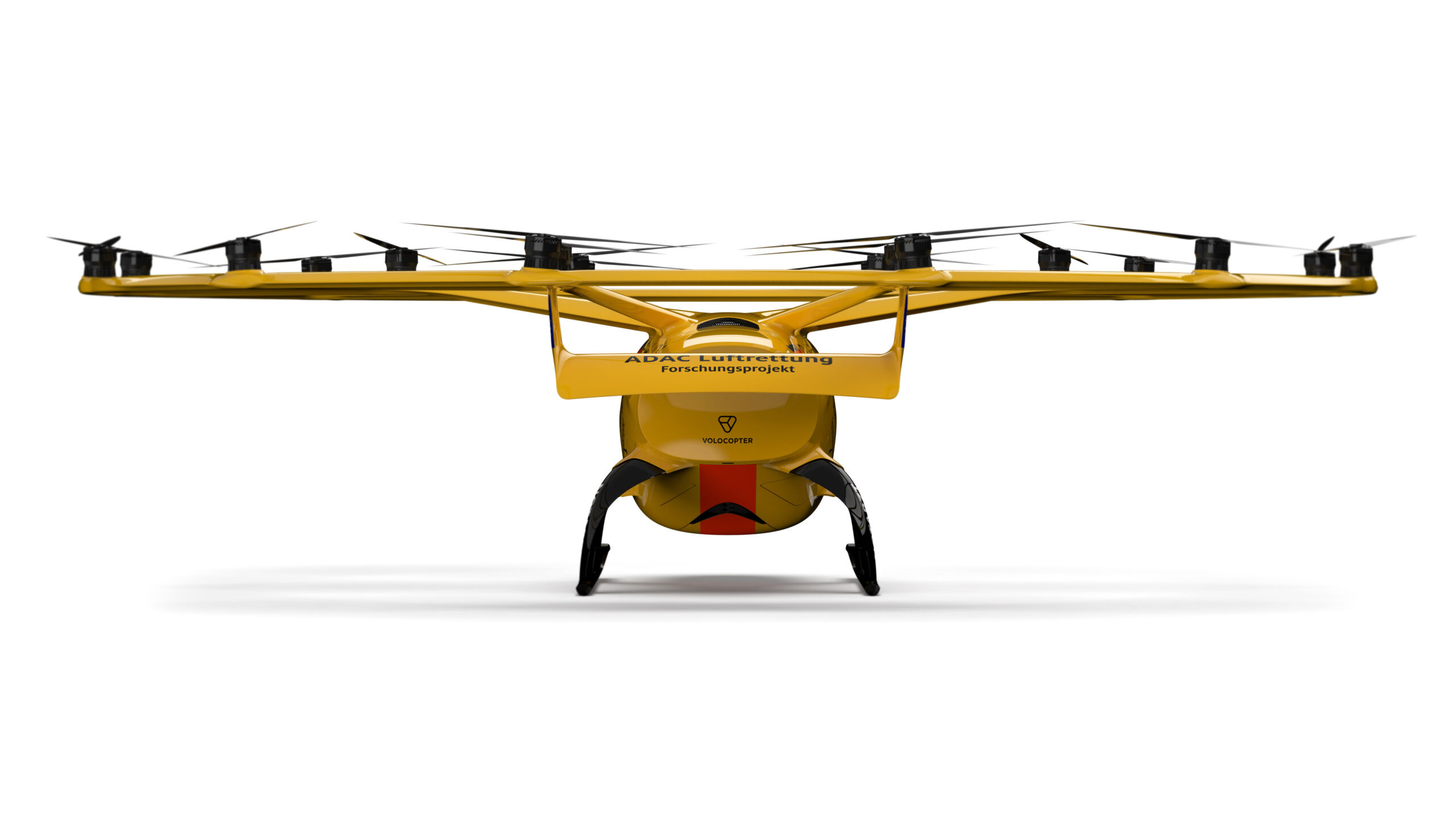 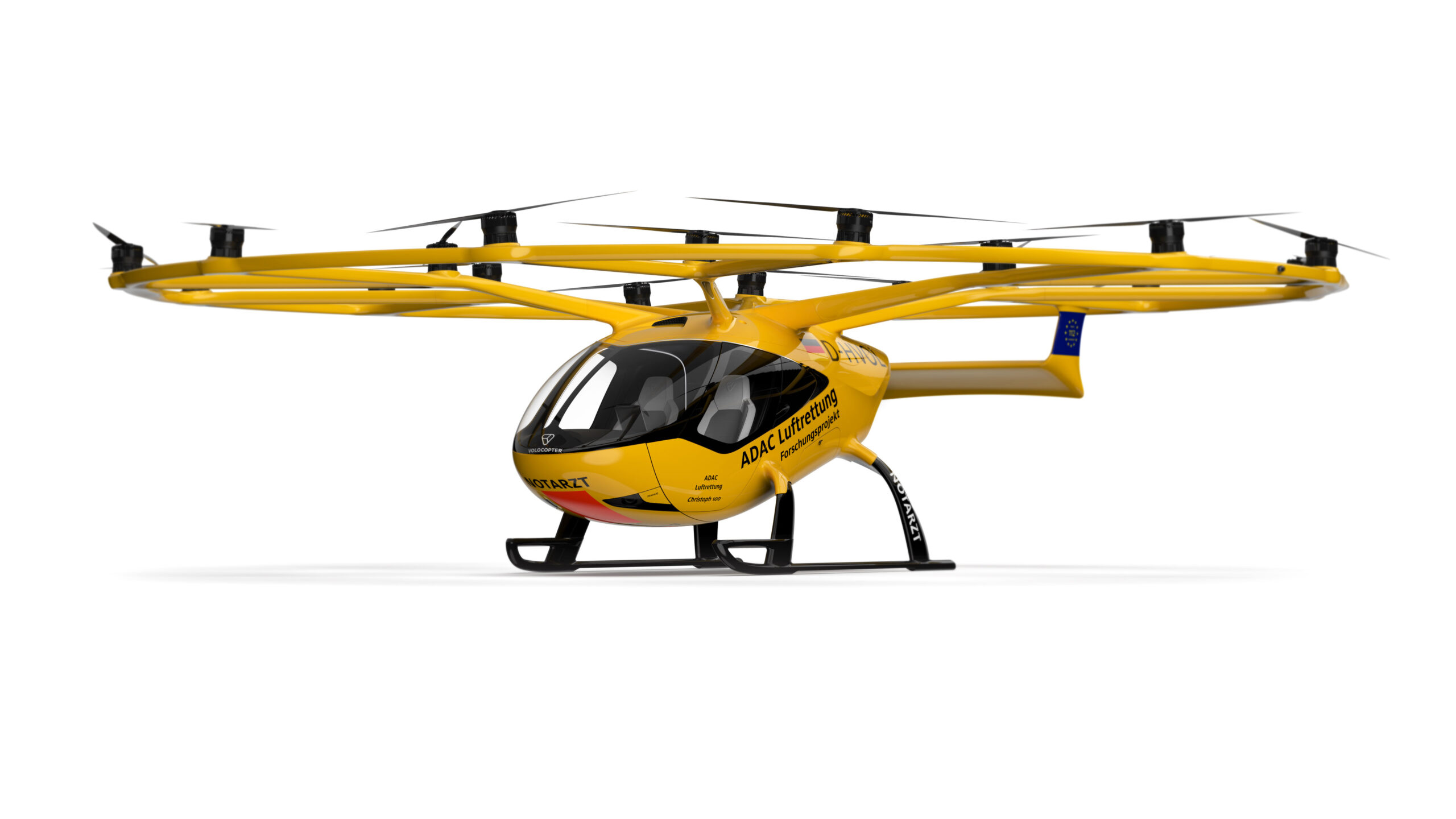 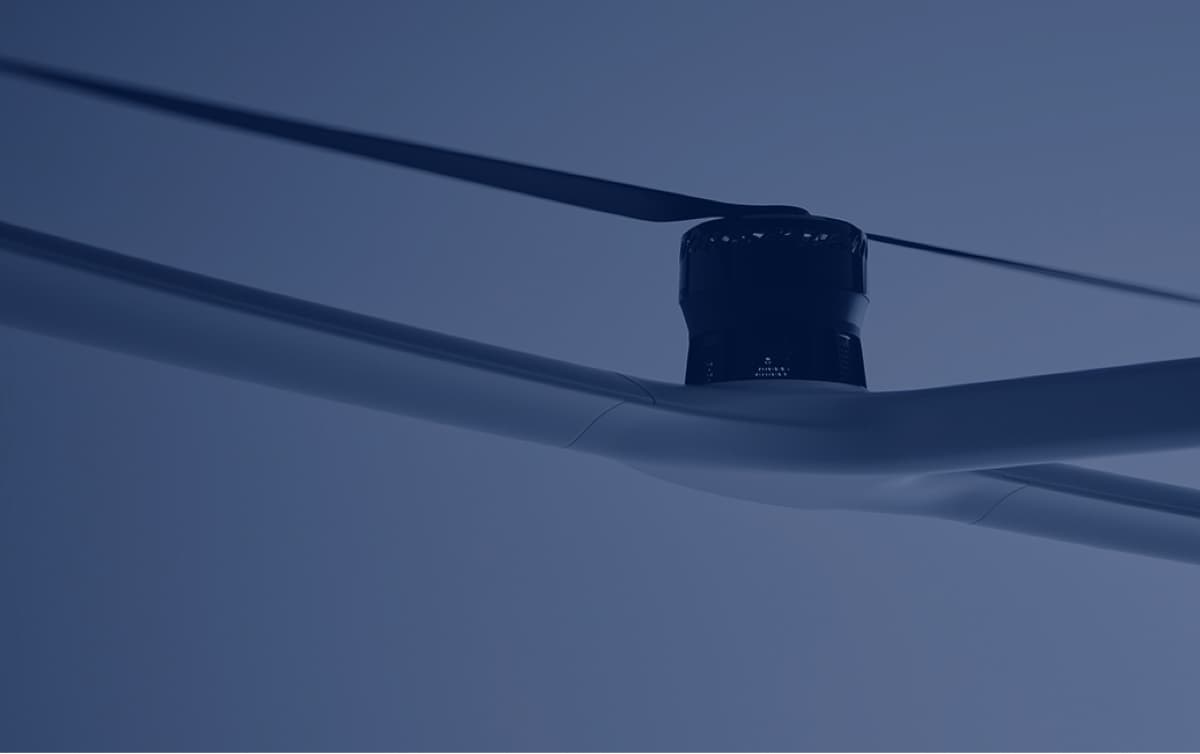 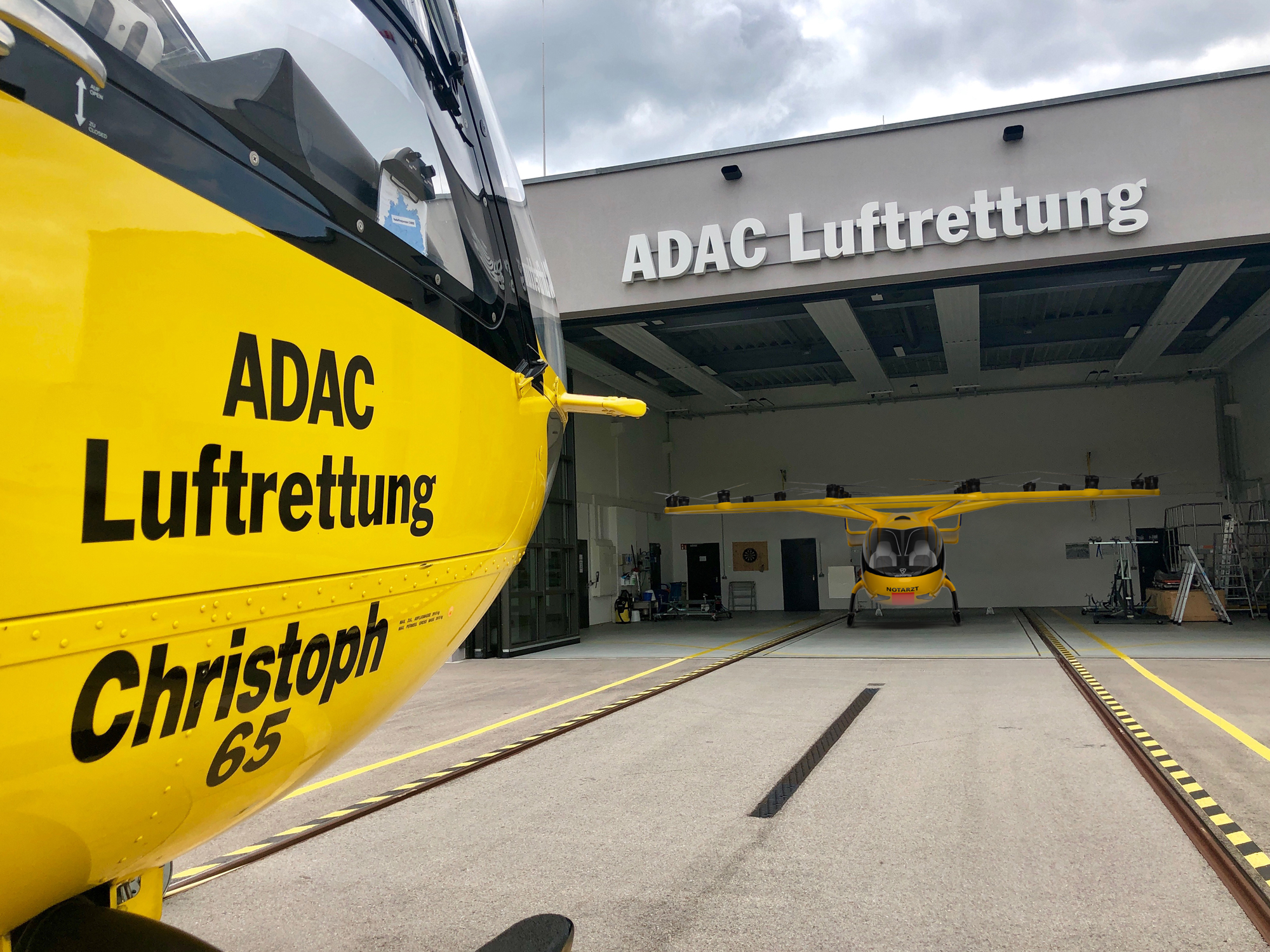 Operating more than 50 rescue helicopters out of 36 bases, the charitable ADAC air rescue service is one of the major HEMS organisations in Europe. Since 2017, the organisation has operated under the umbrella of the charitable ADAC foundation. The ADAC rescue helicopters are part of the German EMS system. If need be, they are requested by a rescue coordination center after a 112-emergency call and deployed to rescue injured or ill persons. “Racing against time and for life” is the motto of ADAC Luftrettung gGmbH. One rule applies especially in the case of serious injuries or illness: the faster the patients are taken to an adequate hospital for treatment or attended to by an emergency doctor on site, the better are their chances of survival or convalescence.

The charitable ADAC foundation promotes research and education to prevent accidents: scientific findings are meant to increase safety in road traffic and in non-professional motor sport. Moreover, the ADAC foundation works to raise awareness in children and teenagers of the dangers of road traffic. By promoting mobility research, the foundation contributes to furthering the sustainable development of road traffic. The foundation also provides relief for persons in need after an accident, helping to restore their mobility. Another funding priority is rescue in life-threatening situations by ADAC Luftrettung gGmbH.